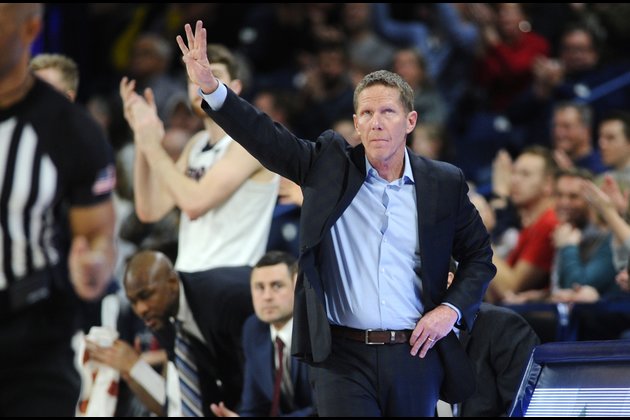 Maybe they were both looking ahead to Saturday night's clash.

Both second-ranked Gonzaga and No. 23 BYU gutted their ways to victories on Thursday to set up a matchup of the top two teams in the West Coast Conference on Saturday in Provo, Utah.

The Bulldogs defeated the Cougars 92-69 on Jan. 18 in Spokane, Wash. That win was Gonzaga's sixth straight over BYU, who played without leading scorer and rebounder Yoeli Childs.

The Bulldogs lost their leading scorer Filip Petrusev, who left the game with an ankle injury after playing just 15 minutes and scoring five points.

Both will be ready to go come Saturday.

Now the stage is set for one of the marquee games of the weekend as the regular season winds down. Gonzaga can clinch its eighth straight WCC championship and 19th out of 20 with a win.

The Bulldogs (27-1, 13-0 WCC) overcame their worst half of the season and rallied from a nine-point halftime deficit to beat San Francisco 71-54.

A couple of hours earlier, the Cougars, who are ranked in the Top 25 for the first time since the end of the 2010-11 season, defeated a pesky Santa Clara squad 85-75 for their seventh straight win.

"I think they're the best team in the country right now," first-year BYU head coach Mark Pope told the Deseret News of Gonzaga.

TJ Haws, who was 12-for-12 from the line and scored 28 points in Thursday's win, didn't think the Cougars were preoccupied with maintaining their national ranking or looking past Santa Clara and ahead to Saturday's matchup.

"I don't think so. All year, this team has really believed in ourselves," Haws said. "The national ranking is cool, whatever, but I feel like we've built habits all year long of taking it one game at a time."

Good habits helped the Bulldogs avoid a colossal upset. Mark Few's squad committed eight turnovers, made just 38 percent of its shots and scored just 22 points in the first half.

"We were doing things I haven't seen in practice or all year," Few told Spokesman.com. "Trying to make tough passes, we weren't slowing down and catching the ball first. Weren't finishing strong around the rim. We just weren't very good."

The second half was all Gonzaga. The Bulldogs scored 18 of the first 20 points to regain control.

"I thought we were spectacular on the defensive end in the second half," Few said. "We just did a good job contesting shots, did a good job of giving them one-and-out and got our break going."

Killian Tillie, who missed the previous game against Pepperdine with an ankle injury, kept Gonzaga close with nine first-half points. He finished 10 of 13 from the field with 22 points.

Saturday's game pits intriguing matchups all over the floor.

Two of the nation's best big men -- Childs and Petrusev -- will go head-to head. Childs recorded 22 points and 11 rebounds against Santa Clara while Petrusev had 16 points and seven boards against USF.

BYU's backcourt of Haws and Jake Toolson scored 17 and 16 points respectively against the Bulldogs in January. The Gonzaga frontcourt of Tillie (22 points) and Corey Kispert (19) combined for 41 points in that same game.