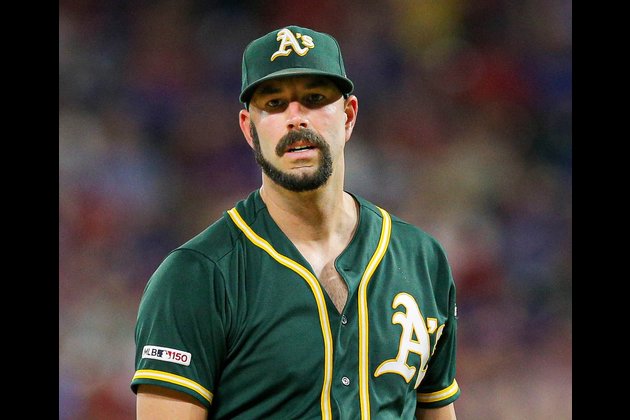 Oakland Athletics pitcher Mike Fiers, who exposed the Houston Astros' method of electronically stealing signs in the 2017 season, has acknowledged receiving "threats of physical violence," according to the San Francisco Chronicle.

Fiers was a member of the Astros in 2017. While he said he's unconcerned about his own safety, he told the Chronicle he does worry for his family but sounded resigned to getting public backlash from some.

"Whatever, I don't care," Fiers said, according to the newspaper. "I've dealt with a lot of death threats before. It's just another thing on my plate."

In a story in The Athletic on Wednesday, Fiers said he has no interest in extra security from Major League Baseball after commissioner Rob Manfred said this week the league is concerned for the pitcher's safety. He also said he'll be prepared on the field.

"I'm here to play baseball and I can defend myself, if anything," Fiers said, according to The Athletic. "We do have National League games, and I'm going to have to get into the box (to hit) just like everybody else. It's part of the game. If they decide to throw at me, then they throw at me. There's nothing much you can do about it."

If punishment for the 2017 Astros ever included handing back championship rings, one of which Fiers received, he said he would be fine with that.

"I said from the beginning, 'I'm not away from this. I was part of that team, I was one of those guys,'" Fiers said. "Suspensions, fines -- I'm willing to take as much punishment as they do. If they ask me to (return the ring), it's not the end of the world."

"I want to be really clear about this: Mike, who I do not know at all, did the industry a service," Manfred said. "I do believe we will be a better institution when we emerge at the end of this episode, and without a Mike Fiers, we probably would have a very difficult time cleaning this up. I think we would have done it eventually, but it would have taken a lot longer.

"I have a real problem with anyone who suggests that Mike did anything but the right thing."