Wild-card spot in play for Phillies vs. Braves 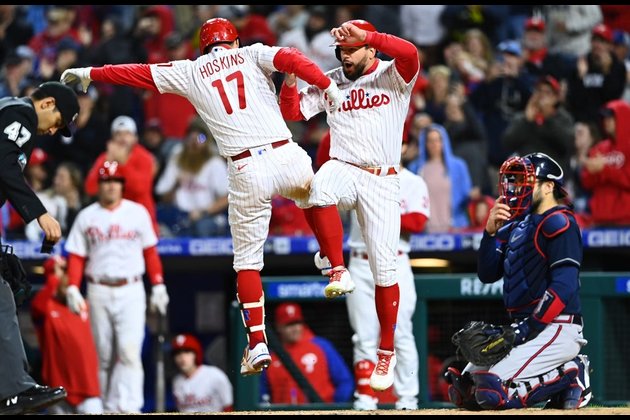 They will go for four in a row when they host the Atlanta Braves on Saturday.

The Phillies have taken the first two of the crucial four-game series as they attempt to reach the postseason for the first time since 2011.

Philadelphia (83-67) is a half-game ahead of the San Diego Padres (83-68) for the second National League wild-card spot. The Phillies are 2 1/2 games ahead of the Milwaukee Brewers (81-70), who sit fourth in the chase for three wild cards.

"We created a little bit of momentum," first baseman Rhys Hoskins said in a postgame interview on NBC Sports Philadelphia. "We've got to keep it going (Saturday)."

Hoskins was stellar with a home run, a double, a single and four RBIs in Philadelphia's 9-1 win over Atlanta on Friday.

"I've said this for the last couple of weeks -- we've just got to win as many games as we can," Hoskins said. "We're going to face these teams in October."

Alec Bohm added three hits and an RBI and Brandon Marsh had two hits and an RBI for the Phillies. However, Marsh exited the game after his third at-bat, with interim manager Rob Thomson saying the center fielder tweaked his left knee.

Thomson didn't believe that Marsh's situation was serious. Marsh was expected to start again on Saturday.

The Phillies will hand the ball to Bailey Falter (5-3, 3.68 ERA). In Falter's latest start, his only career outing against the Braves, the left-hander tossed 4 2/3 innings and allowed four hits and one run on Sunday.

The Braves (93-58) will hope to avoid a fourth straight loss on Saturday.

Austin Riley had two of Atlanta's six hits in the Friday defeat. The offense struggled without Ronald Acuna Jr., who has sat out the past two games due to a sore back.

"If you handle adversity, there's good things on the back end of it," Atlanta manager Brian Snitker said. "We'll keep fighting and get 'er going again."

Acuna's status for Saturday was unclear.

"I'm good, just sore," Acuna said. "But yeah, we're just trying to get better so we can get back in the lineup as quickly as possible."

The Braves went 0-for-4 with runners in scoring position on Friday and left seven on base.

In addition, Atlanta has failed to hit a home run in each of the past three games, part of which could be connected to Acuna's absence.

"It's been a pretty frustrating time, but there's highs and lows," Acuna said. "Honestly, my goal is just to try and get healthy and stay healthy and carry that on to next season as well."

Atlanta ace Kyle Wright (19-5, 3.18 ERA) will look for his 20th victory when he takes the mound on Saturday. In Wright's latest start, on Monday against the Washington Nationals, he gave up eight hits and two runs in six innings.

"The more times I can go out there and pitch as long as I can, however long that may be, and hopefully give us a chance to win -- that's what I think I'm the most proud of," Wright said after the Monday outing. "There's just a lot more confidence when I take the mound."

Wright is 1-3 with a 3.96 ERA in five career games with four starts against the Phillies, including 1-1 with a 2.63 ERA in two outings this year.