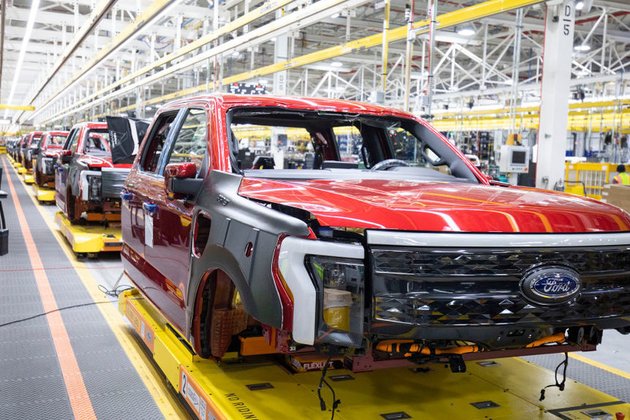 Ford Motor Co. continues to be plagued by parts shortages, so much so that America's largest automaker has reportedly resorted to parking thousands of unfinished pickups at an idle former NASCAR track in Kentucky.

Footage posted online purports to show massive parking lots at the Kentucky Speedway in Sparta, Kentucky, jammed with row after row of new Ford trucks. Automotive media outlets, such as The Drive, reported this week that the stashed vehicles are partially finished trucks that can't be completed or shipped to customers because certain parts aren't available.

Major automakers have struggled since last year with protracted shortages of computer chips. Ford's parts shortfalls are widespread, ranging from windshield wiper motors to infotainment systems. In fact, the Wall Street Journal reported on Friday that the company even has shortages of its iconic "blue oval" badges and the nameplates that identify vehicle models.

Ford announced earlier this week that it had as many as 45,000 unfinished vehicles in inventory that wouldn't be completed by the end of September because of parts shortages. The company added that its third-quarter costs would be about $1 billion higher than planned because of rampant inflation.

Ford's production was similarly backed up at one point last year, when it stored some vehicles at the Kentucky Speedway. The Drive reported that the company has turned to other overflow sites for its unfinished vehicles, including a shuttered ammunition plant in Charlestown, Indiana, about 25 miles from Ford's plant in Louisville, Kentucky. The Louisville plant produces such models as the Ford Escape and the Lincoln Corsair sport-utility vehicles.

The speedway situation reflects not only continuing breakdowns in US supply chains, but also the decline of NASCAR. The 87,000-seat track opened in June 2000, near the height of NASCAR's popularity, but it was taken off the racing circuit in 2020. Once touted as America's fastest-growing pro sport, NASCAR has suffered sharp declines in attendance and television ratings since 2006.

Customers have had to bide their time on long waiting lists for some Ford models, such as the F-150 Lightning electric pickup. Last month, Ford announced price increases of as much as $8,500 for the Lightning.