Unbeatens No. 14 Arizona, No. 10 Creighton to clash in Maui final 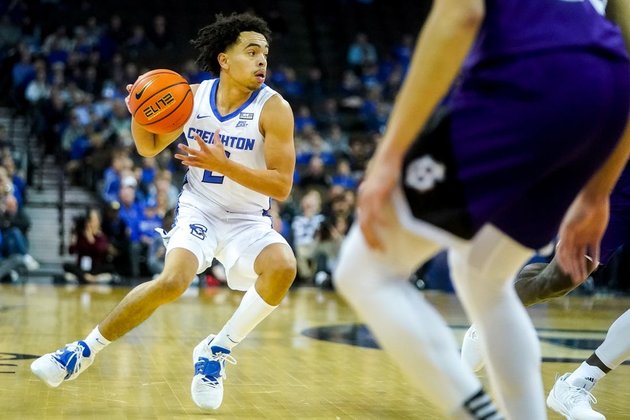 No. 10 Creighton will look to win its first Maui Invitational title when it faces No. 14 Arizona in the final on Wednesday evening in Lahaina, Hawaii.

Creighton is making its first-ever appearance in the Maui Invitational.

Creighton played its best game of the season against the Razorbacks, whose four victories had been by an average of 21.3 points.

But the Bluejays were too prolific for Arkansas, as Ryan Nembhard scored 25 points to lead four Creighton scorers in double figures. The other three were Ryan Kalkbrenner (21 points), Baylor Scheierman (20) and Trey Alexander (12).

"We're going to be a little tired tomorrow, but hopefully our energy and enthusiasm for being in the championship can trump some of that fatigue," Creighton coach Greg McDermott said Tuesday night.

While Creighton had won its first five games by an average of 23.2 points, the Bluejays didn't secure their most recent win until making 5 of 6 free-throw attempts in the final 16 seconds.

"It was just an incredible college basketball game," McDermott said. "There were a lot of haymakers thrown out there in 40 minutes. [The Razorbacks'] poise for as young as they are is really incredible."

Arizona's semifinal win over San Diego State was far less suspenseful than that of Creighton. After the Aztecs took a 42-40 lead with 17:20 remaining, the Wildcats went on a 15-3 run to take a 55-45 lead on Courtney Ramey's 3-pointer with 12:52 to go.

"I thought in the second half we finally settled in and we started cutting a little bit off the ball," Arizona coach Tommy Lloyd said. "I think that loosened some things up a little bit. We started actually setting and holding our ball screen, because they're really good at fighting over ball screens."

The Wildcats had five scorers finish in double figures in their semifinal win.

Ramey had 21 points by going 8 for 12 from the field, including 5-for-5 from 3-point range, to go along with six rebounds. Kriisa added 21 points, five assists and four rebounds, while Azuolas Tubelis added 14 points and Oumar Ballo grabbed a game-high nine rebounds.

The Wildcats' next game after the Maui Invitational will be Dec. 1 at Utah, and Creighton's next matchup will be the same day at No. 4 Texas.

IRVING, Texas: Exxon Mobil Corp will wind down oil production in Equatorial Guinea in West Africa after its license expires ...

HOUSTON, Texas: QatarEnergy and ConocoPhillips have signed two sales and purchase export agreements covering at least a 15-year period, which ...

ISLAMABAD, Pakistan - Russia refused to give Pakistan a 30-40 percent discount on Russian crude oil, claiming that all volumes ...

NEW YORK, New York- U.S. stocks were uneasy early Wednesday following a release of a raft of economic data but ...

OTTAWA, Canada: Canada has launched its Indo-Pacific strategy, which includes spending worth $1.7 billion, with the aim of enhancing military ...